How does the Battery work? what´s with the arrow?

Hi Roshee! Thank you for playing the game :)

The Battery stores energy when touched or jumped on. When full, the energy is released to the next Roboto that bounces on it, adding a multiplier to the scrap metal collected. It's cumulative for some robots. ;)

Try a settup with these four blocks on a line : Start-Battery-Basic-End, and you'll see what happens everytime the block is full, and what happens when the arrow is down.

yeah, I figured it out by now ;) Also I finished the game and must say it´s quite fun :D A few tooltips or general information would improve it alot :) Once I figured out a certain  bot gets boni based on runtime, my income exploded ^^

Yeah, I like that little bean of a robot, very useful!
Have you tried the challenges? They can be quite hard, even once you've finished the main game ;)
(and if you do, know that I love screenshots and/or description of the levels made by the players)

I am definitely noting the tooltip advice, I think you are right... Time to go through the project and improve the user interface with bits and bobs!

Your comment is the one reason I made this game :D I can go in peace now ♥

Hi Dewin,
Appreciate your game a lot...It's much fun to run it in the background while pretending to work.
I don't really have features you could add. But I observed something peculiar: I think Elio changes his behavior when the speed button is activated. In normal speed he does not jump that often into the exit in the setup hjvrgamer proposed 2 months ago (he changes directions more often in speed mode).
Also I would appreciate some explanation to the blocks/robot behavior. Its still a mystery to me what some things do/can do.

Thank you for this feedback and the nice review :p it means a lot.

I agree, Über and Elio physics are affected by the speedUp button, and it was part of many strats when I launched the game in August.
It seems to be bothering a few people though, so I am currently reworking them to be slightly more balanced during the SpeedUp. Will probably roll out the update soon-ish.

For the blocks/robot behaviour, I have begun to write a Starter guide, but as it is not yet finished or available online, here is a quick excerpt that I hope will help :)

Start: Assembles 1 Roboto every 3 seconds. Bouncing on it has no effect.

End: Stores the scrap metal collected by Roboto when they enter it.

Battery: Stores energy when touched. When full, the energy is released if Roboto bounces on it. Add a multiplier to the scrap metal collected. Cumulative for some robots.

Wall: Has a HP gauge and is breakable. It contains as many scrap metal as its HP. The HP regenerates over time.

Incremental: Increases its own value when touched. When Roboto bounces on it, its multiplier increases with the block’s. Cumulative.

Random: Can have a variety of effect, from changing Roboto’s direction to changing its size, or even affect gravity.

For the robots behaviours, I tried to make it as intuitive as possible in-game, and figuring them out is part of the gameplay ^^".
Here is to nudge you in the right direction: Über is heavy, Elio has wings, Cyber goes fast... etc

Have fun, and keep watching the page for future updates!
--
Dewin

is this game dead ? is there anyone still play this ?

I hope the game is not dead, and it seems that a few people are regularly coming to play or discovering the game :)

I have not been updating the game in September, for there is nothing major to push in an update, and I am focusing my efforts on trying to make and android-compatible version.

Is there anything you would like to see in an update in the meantime?

I thought you would like to know the Super-Duper-Mega-Update I was working on Idle Roboto is now available ;)

If you still have time to play, I really hope you will enjoy the additions I made to it, and especially the Challenges menu!

Not sure if it would mesh well or how easy it would be to implement, but perhaps a teleporter block that connects two spots with a short cooldown would be really cool. I can already think of some neat things to do with Cyber and Uber! 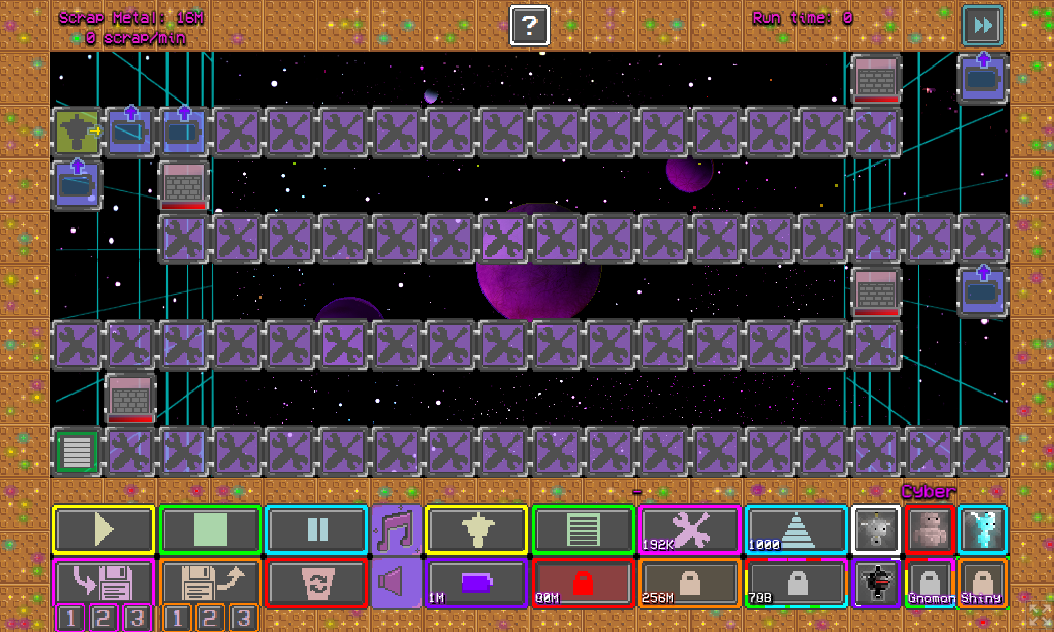 Ok so here's the idea with this:

Cyber is a fast boi who likes straight lines, as it allows him to go fast and gain a multiplier (as far as I've seen). The Brick Walls are to keep a full spawn's worth enclosed to bounce back and forth for a while, racking up a bunch of points. You know how if you collide with a Basic from the side it activates but doesn't give you any scrap? Well it turns out Batteries, when hit side-on, still give you all of the benefits. That's all well and good, but when facing downwards, a roboto will charge up the battery a bunch but be consumed in the process. However, when hit side on, it gets the bonus charge but doesn't eat the lil guy, hence why I made those small gaps where the Cybers will bounce back and forth at high speeds getting permanent multipliers for a bunch of them. I repeated that as many times as I could. This layout works best when you're actively switching the completed batteries back into the lower position, and works even better when there are still walls, but it can get up to about 50k spm if you try hard enough. Glhf yall!

Also dev if you see this, really neato game! Its kept me going through the start of virtual school

Edit: If you put Batteries under the Brick Walls then your spm does up drastically, like I'm easily hitting 150k spm without any involvement

I really love this, your setup is great! You're taking full advantage of the active play in this. Have you tried active play with other robots as well? (hint hint)
I am so glad you like the game, I keep adding touches here and there as I see people's comments.
I tried your level design and the bonus didn't apply when the battery emptied itself :( but I just love the idea so I went into the code and made sure it will apply every time now ;) There will officially be a 'Neato' update with a powered up Battery (and a few others suprises) thanks to you! I should roll it pretty soon.
If you keep playing, don't hesitate to send other designs, it's great to see what you came up with, and good luck with the school, these are indeed unusual times!

The Neato Update is live ;) 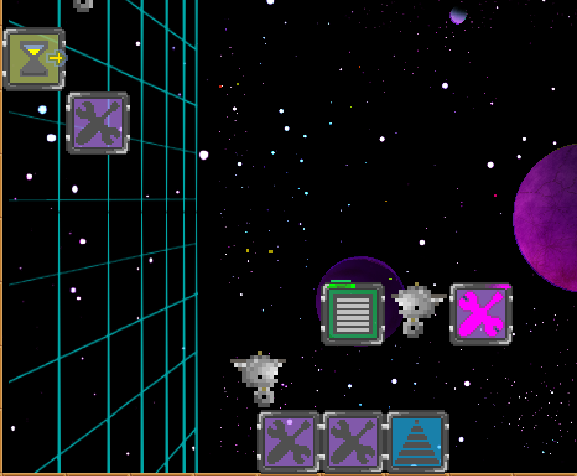 Would be nice if there was some in-game description of what each of the blocks does. Spent the last 10 minutes trying to figure out what happens when a battery block's fully charged. Otherwise, I'm having fun with this one.

Thank you for trying the game, I am glad you're having fun with it :)

Explaining as little as possible is intentional, I do want people to spend some time figuring things out. I hope it is not too frustrating.

When the game is out for a little while, I am thinking of posting a guide to explain how things work a little futher. But for now I am trying not to spoil anything ^^

custom UI i made for you if you like :)

P.S : i can't find the original SHINY to compare :C

Ooooh good job! You actually reworked the pixel art! I love how Über looks very muscular and Shiny looks like a religious apparition  : )

I will keep it preciously, thank you very much. Maybe in a future update I could implement it (I'll see how it fits).

I have a bug with the jump pad and Über.

I'm not sure the landing thing is a bug, because it happened to me with numerous different blocks and also affected Elio (I haven't gotten past that so I'm not sure if it affects Cyber or the rest). Bug or feature, I've done some neat things with it so far

Thank you for this. I did fix the Über's jump to make it more natural, however, as Syrgpure wrote, moving the opposite way when landing from up high is intentional, so I didn't touch that ;)

I also fixed a couple of behaviours late game, tell me if you notice anything!

P.S: Have you unlocked Shiny yet?

so moving the opposite way when landing is a feature

no i hadn't unlock SHINY yet but i can unlock Elio

P.S : i don't know if it worth it to unlock Elio